I’ve found that I couldn’t get the same level of reliability using my preferred buffer tube, buffer (Kynshot RB5007) and spring (556 Tubb flat spring) setup I use for the 9mm and .45 CMMG RDB builds.  What would happen is failure to fully chamber the round.

New Frontier Armory spacer since I’m using the carbine length buffer in the A5 which allows the buffer spring to use the extra length but prevents the carrier from going back to far.

I may mess around with A5 buffers later which is why I’m leaving the A5 tube installed at this time.

This yields a nice cyclic rate of 602 RPM.  It has been pretty reliable but the ejector springs still fail around 1K rounds like it does in 9mm.

Suppressor is an old SWR GSG40 with custom Curtis Tactical ‘Bixler’ 3 lug mount.  Almost 40 RPM increase in cyclic rate at 639 RPM.  Reliability suffers some when suppressed, I occasionally get failures to fully chamber the round.

Still having some reliability issues with this configuration .  It requires a good amount of force to fully chamber the round while at the same time if there is too much mass for it to overcome, it will have malfunctions on the rearward stroke.

I am currently using a custom tungsten weight (5.1 oz) in the carrier.

Cyclic rate went up about 30 RPM more with this lighter buffer when unsuppressed.

Suppressed, rate is similar to what I see in many of the 9mm RDB configurations with an approximate 60 RPM increase.  However, it is much more reliable with these components than anything else I have tested so far.  Even at this cyclic rate, I can still pull single round bursts at will.

9/6/20  Configured above ran several mags flawlessly yesterday then went to SMG match today and it started giving me malfunctions to fully chamber rounds again sometimes.  I went back the MGI buffer and unsuppressed and ran 1 stage clean.  Later starting to do the same thing again.  Did have 1 failure to eject so ejector spring may be starting to go again.  Need to measure how strong it is but I’d say I’m not even at 500 rounds yet.  I’m going to go back to the spring loaded tungsten weight in the carrier and try that.  If that with the GA SOB buffer.  I may try replacing one of both the of the GA SOB weights with tungsten as well.

10/10/20 – The .40SW RDB has been very temperamental for me.  Using all tungsten weights in the GA SOB didn’t help.  Ran about 500 rounds today with various configurations and have come to the following conclusions.

Pictured below is the suppressed configuration that currently appears to be reliable.  Suppressor is re-core by Curtis Tactical.  I plan on writing some more about this suppressor. It has excellent serviceability and performance.

Pictured below is the un-suppressed configuration that currently appears to be reliable. 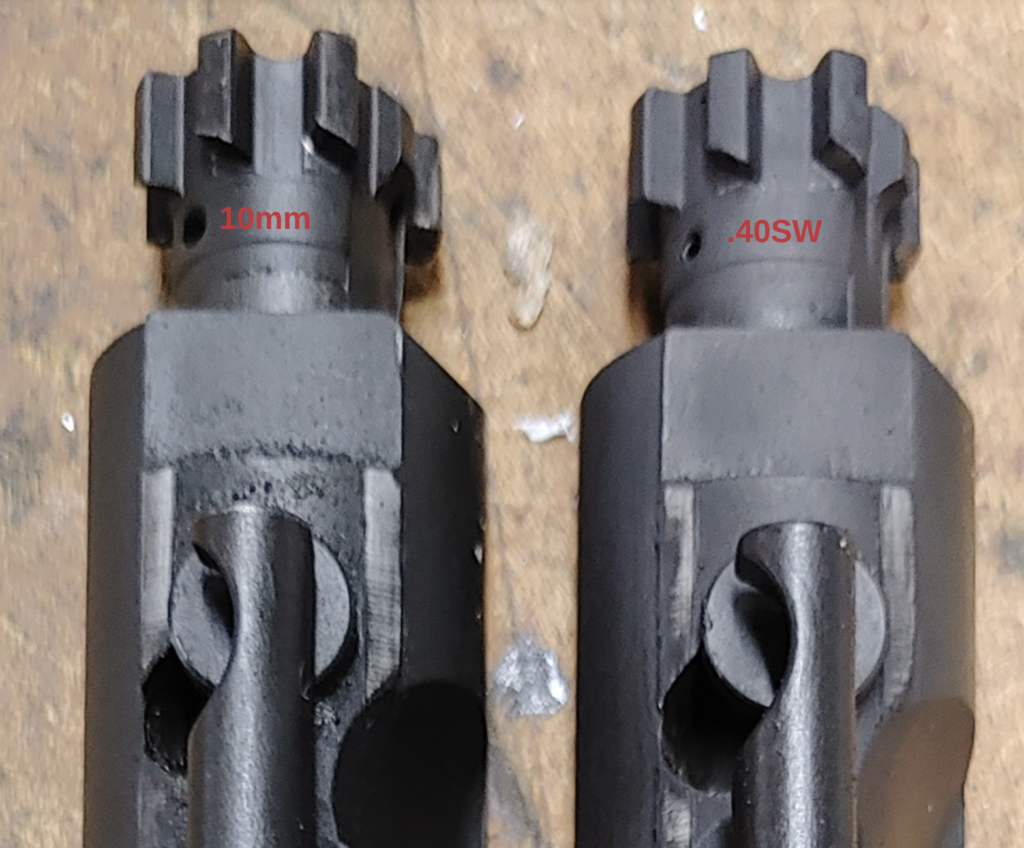 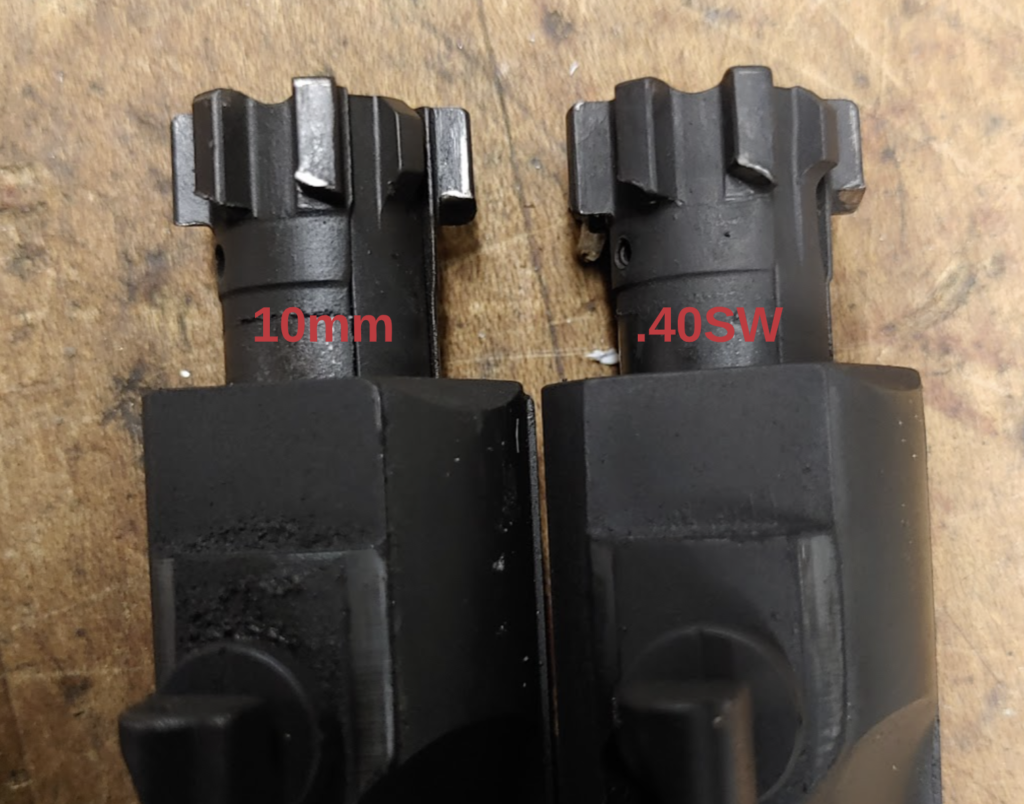 I’m guessing 67 indicates the angle off the bore’s axis. 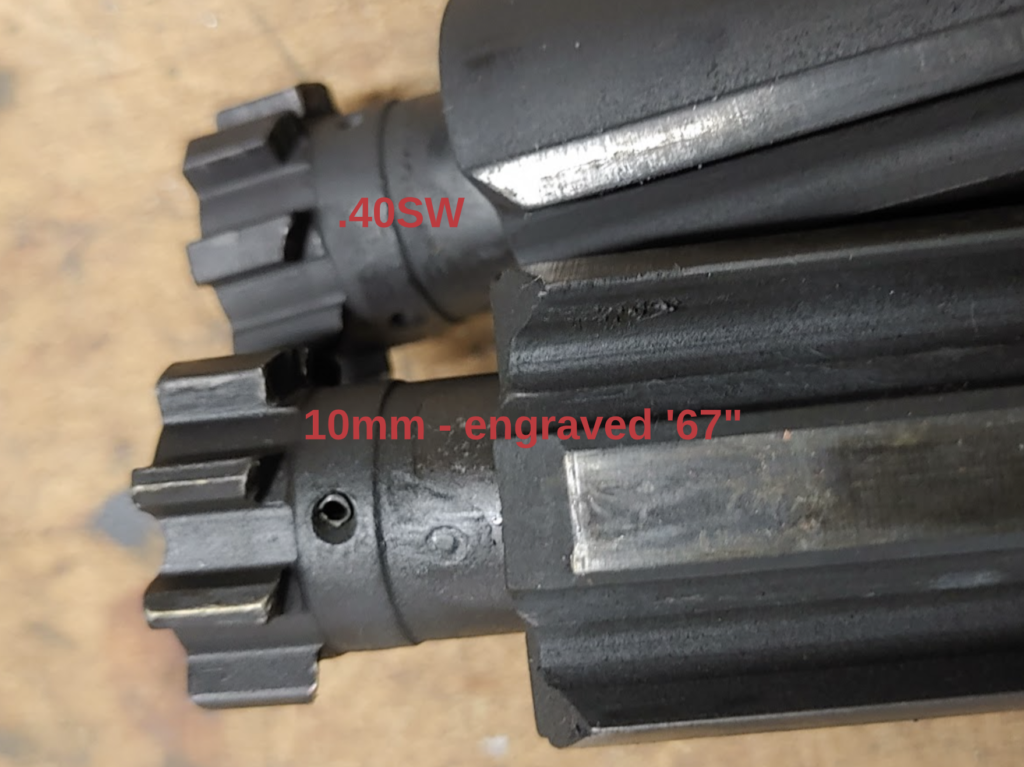