Commonly known benefits of the A5 system:

Number 3 – in comparing to standard carbine H1, H2 or H3, I personally haven’t run into any reliability concerns where I would think that the spring loaded A5 buffer would be superior.

Number 1 is the biggest benefit I see….which I think you can achieve by just switching to the Tubb flat spring…however if you read the entire article, you will see why I like to use the Tubb flat springs and the A5 but it all comes down to what you are trying to do.

The Tubb 556 and 308 buffer springs are advertised to work in a standard carbine AND rifle buffer tube.  They will obviously work in an A5 buffer tube as well. 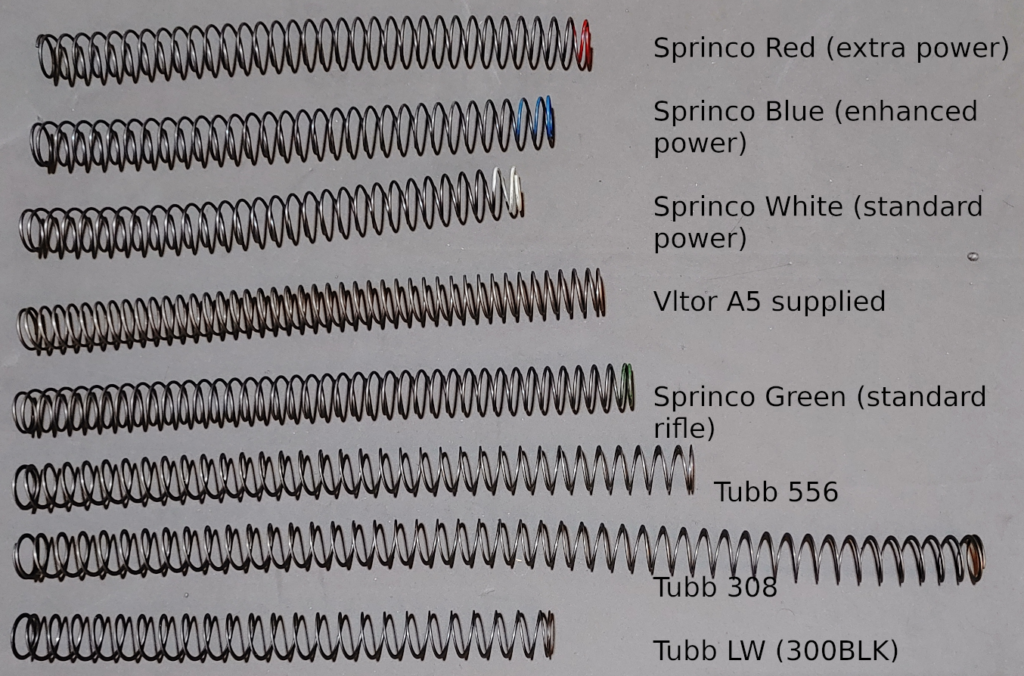 David Tubb does a great job going into the details of his springs with his Youtube video and I encourage anyone reading this to watch it.

Mr. Tubb uses a load sensor to quantitatively prove that the flat spring provides about the same amount of force (actually slightly more which is better) as an A2 buffer spring does in the open and closed position.

Also see the numbers below for the Tubb 308 flatwire spring where the open and closed loads are really close.

As shown in the video, these values were all obtained in a standard carbine buffer tube….so the Tubb flat spring is able to give you the same benefits of using a rifle length spring (A5’s primary benefit)……all without changing your buffer tube. 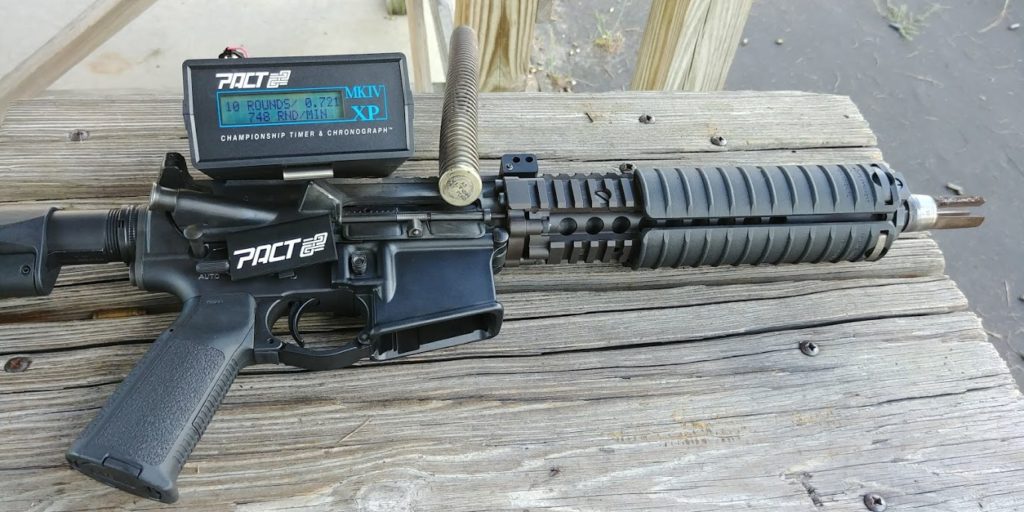 For comparison, the identical upper, M855, standard carbine buffer tube, Tubb 556 flat spring and carbine H3 buffer (also 5.3 oz).  This configuration yielded a cyclic rate of 770 RPM.  A 22 RPM difference…..This is just about the same.  I would expect it to be slightly faster since the shorter buffer tube will give the spring more ‘pre-load’ giving it more strength…the stronger the spring the faster the cyclic rate.  Even so, 22 RPM isn’t much difference.  You can get more variance in cyclic rate if the gun was dirty/clean or dry/lubed.  In this case, both configurations were fired the same day and there was no additional lube added/removed for these two tests so the slight increase is what I would expect. 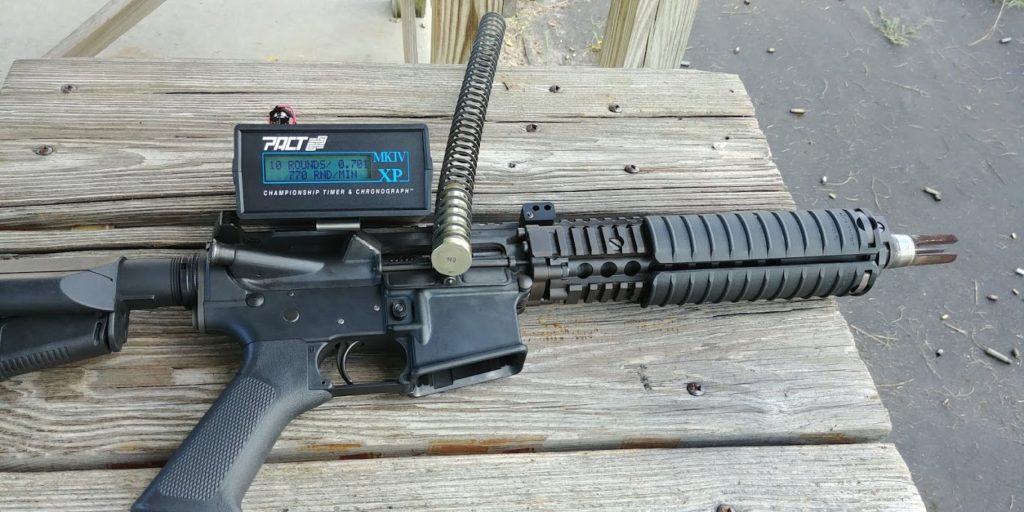 You may be wondering, so is it even worth it.  Pictured below is what I would consider to be very similar to a stock military MK18 setup. .070″ gas port, H2 buffer*, standard power spring (White Sprinco in this case).  869 RPM.  So 99 or 121 RPM slower than the above configurations.  These are substantial reductions in cyclic rate.  What is hard to quantify is smoothness.

*Yes, I know the H2 (4.5 oz) is slightly lighter but again trying to compare what a stock setup is and even if I swapped to the H3 you are not going to see that much reduction in the cyclic rate between the two.

Cyclic rates give you clear quantitative proof something is happening. Slowing down the cyclic rate gives the magazine more time to feed which is obviously a good thing and will increase reliability.  It obviously doesn’t tell you how smooth a configuration is. 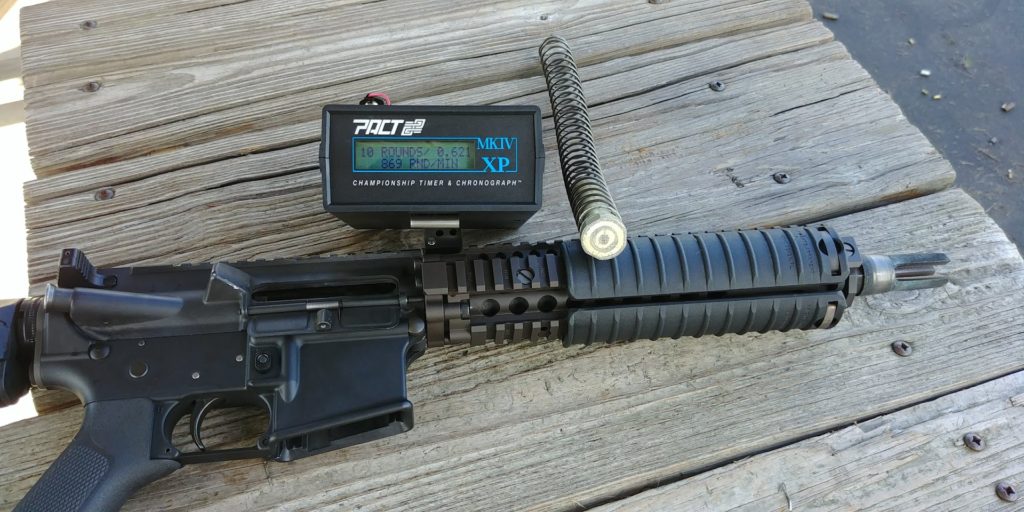 As a simple inexpensive upgrade, I believe that just by swapping to the Tubb flat spring, you can immediately gain the benefits of the A5 system (which is primarily the usage of rifle length spring) without the expense or hassle of swapping buffer tubes.

So why bother with the A5 if I can just use the Tubb flat spring?

This is obviously not for everyone.  I would say for a lot of people just swapping springs to the Tubb flat springs would be a great improvement.  However, for those that are always looking to improve things, the longer A5 tube opens up more options for tuning than utilizing a standard carbine tube and if you want to go back to a carbine tube, you can always add a spacer that replicates the depth of the carbine tube.

In continuation of the information I provided above, what if we take the same configuration shown in the first test and replace the Vltor A5H2 with the Kynshot hydraulic RB5007 that is the same length as the A5 buffer and use the 556 Tubb flat spring?   We now have a cyclic rate of 690 / 697 RPM…depending on what timer you are looking at.   We are now dropping the cyclic rate by another 51 / 58 RPM.

Again, I cannot quantify the smoothness…but the hydraulic buffer definitely provides a much smoother recoil impulse than the A5H2 or H3 configurations above.  It can be argued that hydraulic buffers can fail and I totally agree.  Many years I ago, I had an original Colt hydraulic buffer which ended up leaking on me.  I’ve never had the Kynshot buffers leak but I have had the ‘head’ of these buffers fall off which stops them from running in full auto.  This has happened to me about 4 times and each time they have been replaced by the manufacturer.   Each time I was told design changes have been made which BTW, I could see the subtle changes.  So far, I have not had the latest iteration fail.  I’m not using these in combat so I continue to use them since I find the performance benefits to be worth it to me.

If I wanted absolute reliability over smoothness, I would go with a typical H2 buffer (or A5H2 if using an A5 tube) as there is pretty much nothing to fail.

The A5 buffer tube + 556 Tubb Flat spring + hydraulic Kynshot RB5007 is a configuration I use in about 90% of my full auto configurations.  Some examples:

Use with the Surefire OBC

Below I’m using the A5 but notice the spacer to prevent the carrier from going too far back.  The spacer I’m using allows the spring to use the additional length of the A5 tube which gives less ‘pre-load’.

The ‘long stroke’ and modified cam pin geometry of this carrier design provides a cyclic rate significantly lower than a stock MK18 but still not as slow as my recommended configuration shown above nor is it as smooth.  I need to test it but I would think that swapping out the Surefire supplied spring with the 556 Tubb would drop the cyclic down as well.

Same Surefire OBC used above but since I’m using the A5, I can now use ANY carbine buffer I want with the addition of a smaller spacer (equivalent to two quarters) to prevent the carrier from bottoming out.  In this case, I’m using the 556 Tubb flat spring, and the Kynshot RB5005 (same length as a carbine when compressed).  This is a difference of 244 RPM slower than the ‘stock’ MK18 configuration and noticeably smoother.  This is the smoothest MK18 configuration I have tested.

Again, you can use ANY carbine buffer now.  So if you don’t want to go hydraulic, use whatever else you want like the tried and true H2 which will yield a cyclic rate between the Surefire provided buffer and the hydraulic….but of course it won’t be as smooth as the hydraulic.

Also note that in all this testing the gas port was .070″ and the ammo was M855.  I believe that making sure you have the optimal gas port size is #1.  You should do that before even looking at any buffers or springs.

I also have all this data replicated suppressed as well but again, I’m trying to minimize the content to hopefully allow the reader to easily follow the information.