For a long time, my favorite 9mm SMG suppressor has been the Gemtech MK9K.  The larger diameter always looked right on SMG’s as well as it relatively short length (8″) compared to other suppressors of its time.  I got my first one back in 2001.  I’ve had 3 or 4 of them at one point as well as other ‘modern’ SMG suppressors but always went back to the MK9K for it’s pleasing tone and low back pressure.  Many of the more modern compact suppressors have a higher pitch and are marketed to people that also want to put them on pistols which typically results in a skinnier tube so it doesn’t occlude iron sights.  These skinnier tubes are typically using a baffle stack that yields higher back pressure, have a higher pitched tone and just don’t look right on a SMG.

Lately, other cans have been coming out to be more focused on actual SMG / PCC use but many of those offerings have been sealed and therefore not user serviceable. If you look at my cleaning page you can see how fouled my MK9K got where the ports going into the outer chamber were getting clogged…there is no point to having a large diameter coaxial design if the ports going to the outer tube get clogged and you are no longer utilizing that increased volume.

Besides the cleaning aspect, having a completely serviceable suppressor also future proofs your suppressor for upgrades or if there is a core failure, you should be able to get it repaired / replaced assuming the outer tube is not damaged (assuming the tube is the serialized part).

All that said, while I really like the MK9K, I thought it could be shorter and I really didn’t like how the inner core was never meant to be user serviceable.  (I know some people have managed to totally break them down but that was never condoned by Gemtech).  In addition, the MK9K uses an aluminum outer and inner tube and blast baffle while the remaining baffles are made from SS.  So no harsh chemicals should be used on the majority of the components.  Fast forward to 2019 and GSL has re-introduced the MK9K as the Phoenix and have released it as being completely serviceable but again they are using aluminum tubes and baffles as well as retaining the original length and weighing in at 18.2 oz.

I had an approved Form 1 and was thinking about doing a 4th MK9K variant but wanted something completely serviceable with NO aluminum and shorter than the MK9K.

In late 2019, I reached out to Joe at Curtis Tactical and told him of what I wanted to do.  I told him that I wanted complete serviceability, short length, complete backward compatibility with my MK9K mounts and was willing to give up some of the performance I had with the longer MK9K.  The way I saw it was that it can’t be any worse than an Omega 9K or Wolfman as the end result would be larger in diameter than both of those options.  I don’t think he was too keen on making it backward compatible with my MK9K’s and retaining the coaxial design but I convinced him to make it this way for me as I’m a believer in the performance of the increased volume even if it does introduce fouling to the outside of the baffles….However, this is no longer an issue since I’m using the .005″ SS shim stock mentioned in the cleaning page.

It took some time to get it built but I think Joe himself was surprised / impressed with the results and as result has been making some more spin offs of the design.

This video shows a comparison of my custom Curtis Tactical can compared to my old Gemtech MK9K.  Note that the GoPro is closer to the Curtis Tactical can and it seems to magnify quieter sounds.  When listening to it recorded from a phone, they sound the same.  In person, neither of us could tell a difference in sound.

What is also impressive is that although the new custom can has no aluminum components (although for consistency, I put the same aluminum 3 lug mount for the pictures below), the new can weighs slightly less than the old MK9K.
Joe made the tube and front end cap out of Titanium while the baffles are all 17-4 SS.

Picture below, left to right:
Left – Original Gemtech MK9K – original spring loaded 3 lug mount using Greg Latka’s design that most people copy these days.  The endcaps are knurled but even so can be difficult to disassemble.  Note the ported area filling up with crud.
Middle – This is actually a cloned MK9K core – notice that the inner tube is thicker near the ports as I had an MK9K shear apart from full auto fire from a Micro UZI.  Gemtech later changed their MK9K design to use a thicker tube in this area just like my cloned core.  Note also this is using the Tim Bixler 3 lug mount design which I believe was the first 3 lug suppressor mount designed.  There are no springs in this design and unlike the spring loaded design, it is is rock solid when mounted.  Also note that I had spanner wrench holes put in this end cap to ease disassembly.
Right – New Curtis Tactical ‘hybrid’ – Joe at Curtis Tactical had never heard about the Bixler mount and in the picture below that is an original Tim Bixler SCRC steel nut.  Joe made the threads too short and had to rebuild the rear endcap for me.  I had Joe put wrench flats on the rear end cap as well as put the hex hole on the front end cap of which he provided the big allen wrench. 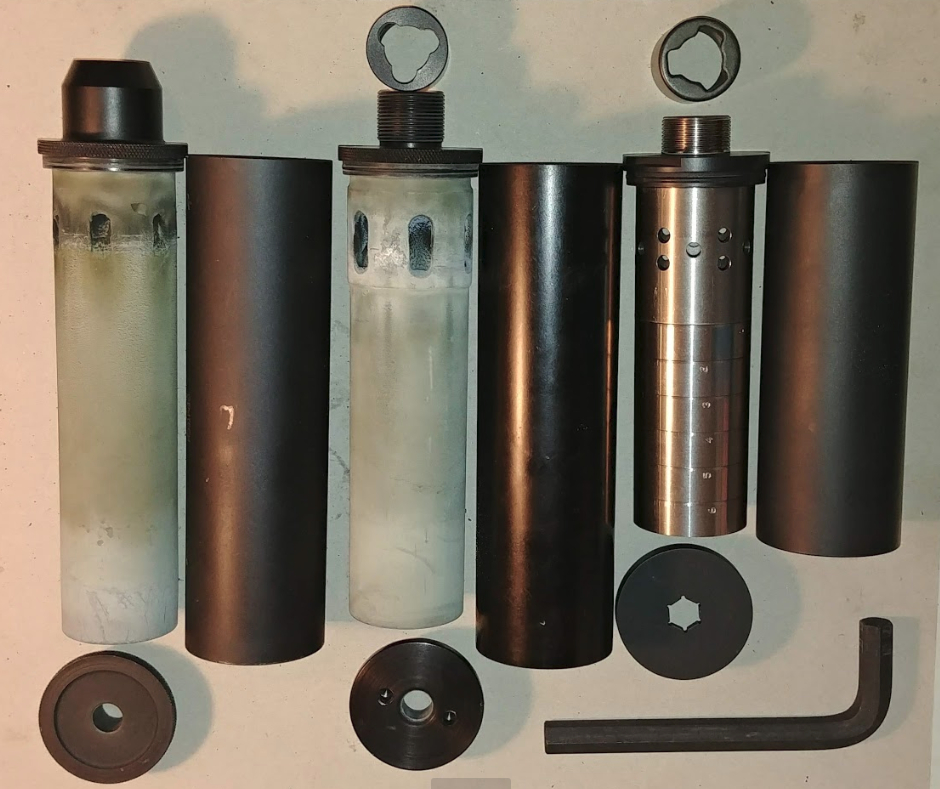 Pictured below you can see how the new suppressor compares to the original MK9K and a Octane 9.
Here I’m using an old UZI mount made by Gemtech that requires a shortened UZI barrel for maximum compactness. 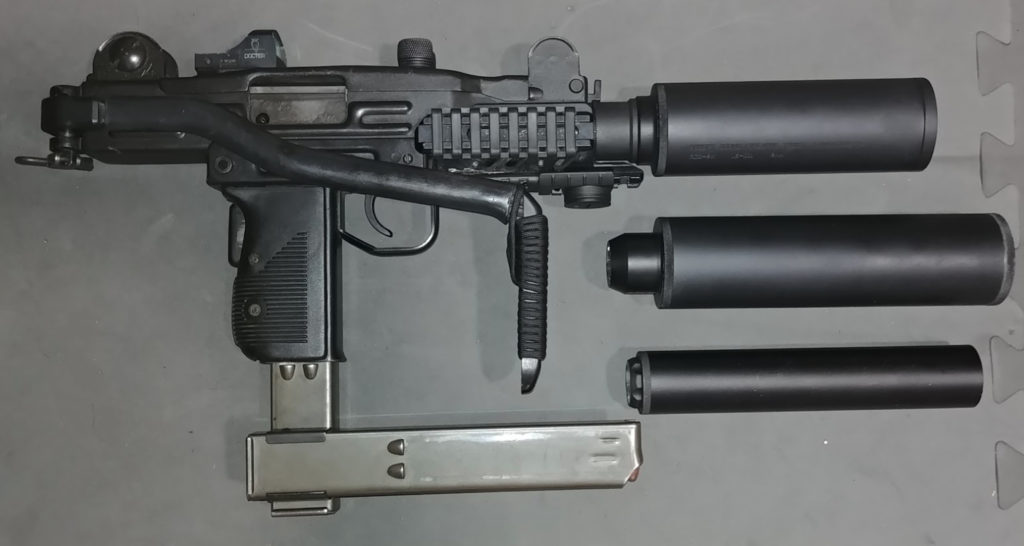 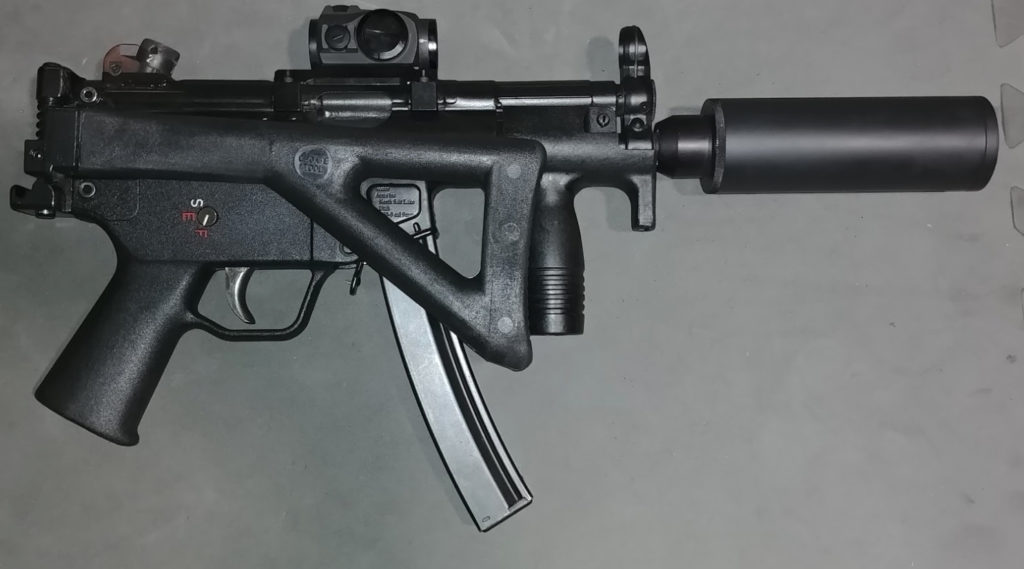 For comparison, picture from old Gemtech 2005 catalog when enough demand brought the MK9K back into production (I had been posted about it quite a bit back around 2003-2004). 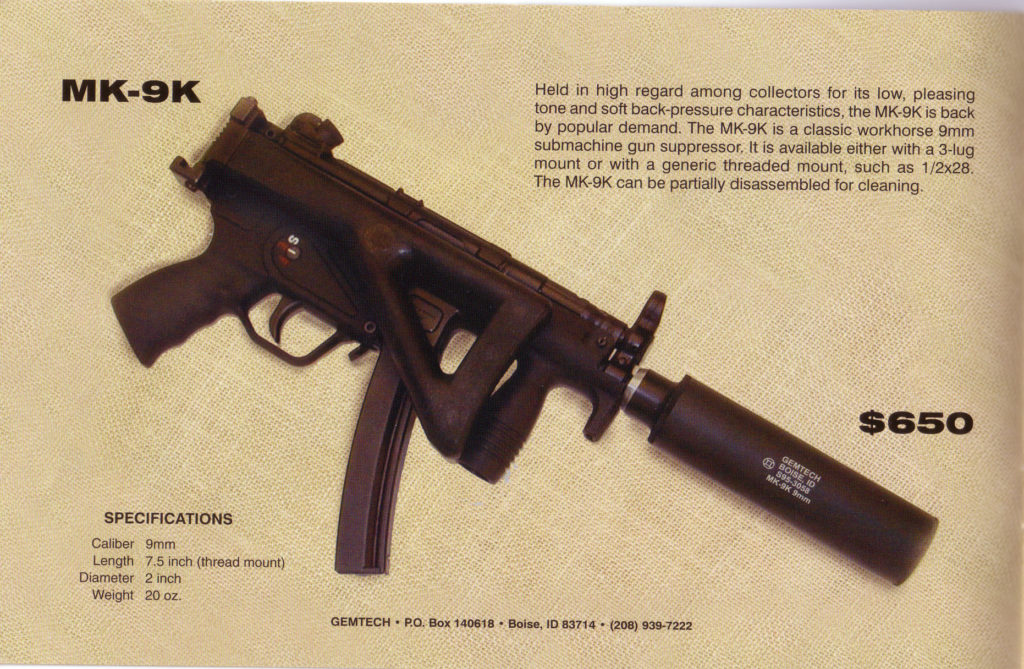 Mounted on 300BLK build with 7.5″ barrel.  Ok in full auto with subs and semi auto with supers.

The picture below showing a side profile of the baffles, you can see that there is a lot of wasted material to make these.  A lot of work goes into making each one.

Since I had posted about my great results with this suppressor, others were buying my custom offering from Joe at Curtis Tactical and Joe gave it the name of the CT9KS.  I decided to send him one of my MK9K’s in to get chopped and rebuilt so I would have two.  Pictured below you can see he made a change to the blast baffle as well as increasing the size of the ports in the ‘expansion’ tube. 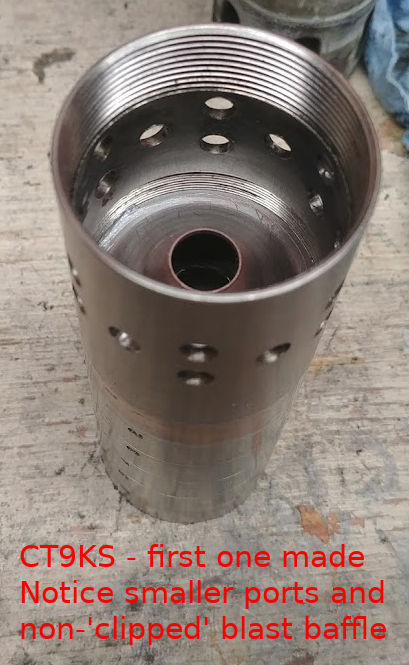 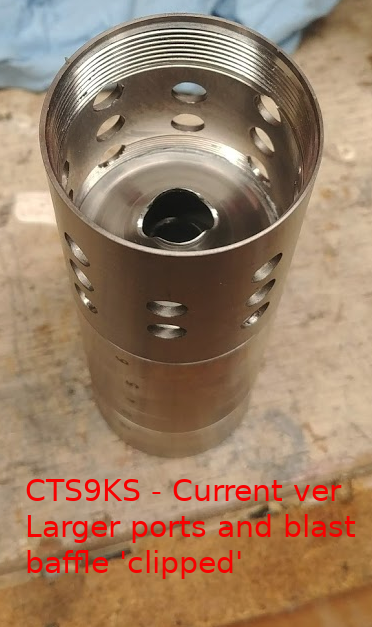 He also told me, “it will handle 300blk sub and super down to 7.5″ barrel, 556 down to 14″barrel. No full auto on super rifle rounds but 300blk subs okay for
auto”.  That way exceeds what the original MK9K was designed to handle.

In the pictures above, the stack on the left I had just cleaned using my ultrasonic and CLR as recommended by Joe which works awesome.  The CT9KS on the right had not been fired yet.  I did have some difficulty disassembling the core on the left for cleaning but finally got it apart.  I fired it some more and the second time I just couldn’t get the baffles apart so I sent both cores back to Joe so he could add disassembly notches to each baffle.

Pictured below you can see how the baffles are now notched to ease disassembly…. for all those people that got one of these from Joe before this process you can send your core back and get it done at no charge.  The tools on the left I got off Amazon but he did mention he plans on making a tool for future customers.  Also note that he angled the notches which is a really nice touch. 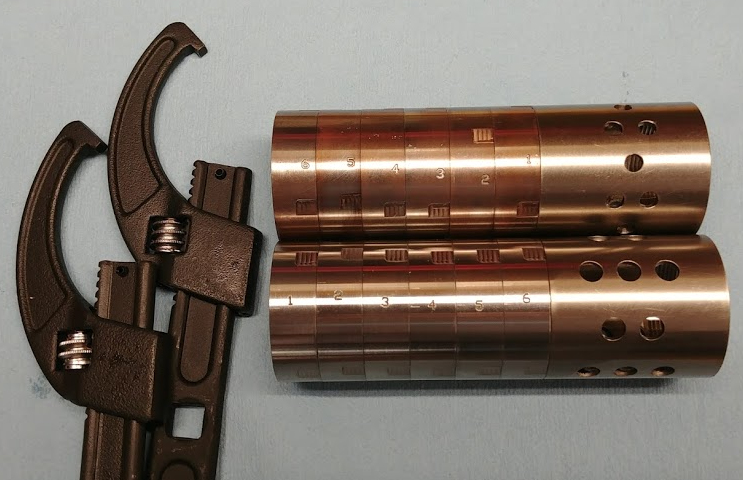 Lastly as recommended in my cleaning page, anyone that owns one of these or a Gemtech MK9K for that matter should get some .005″ SS shim stock to prevent fouling to the inside of your outer tube: 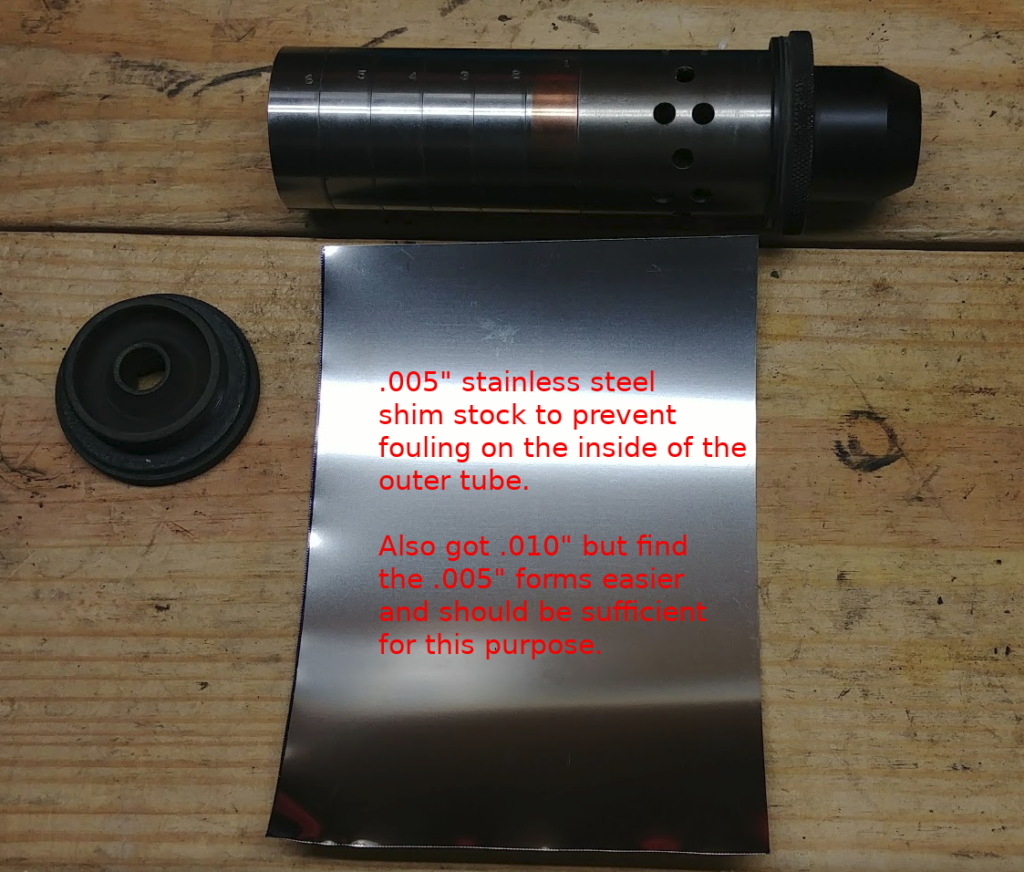 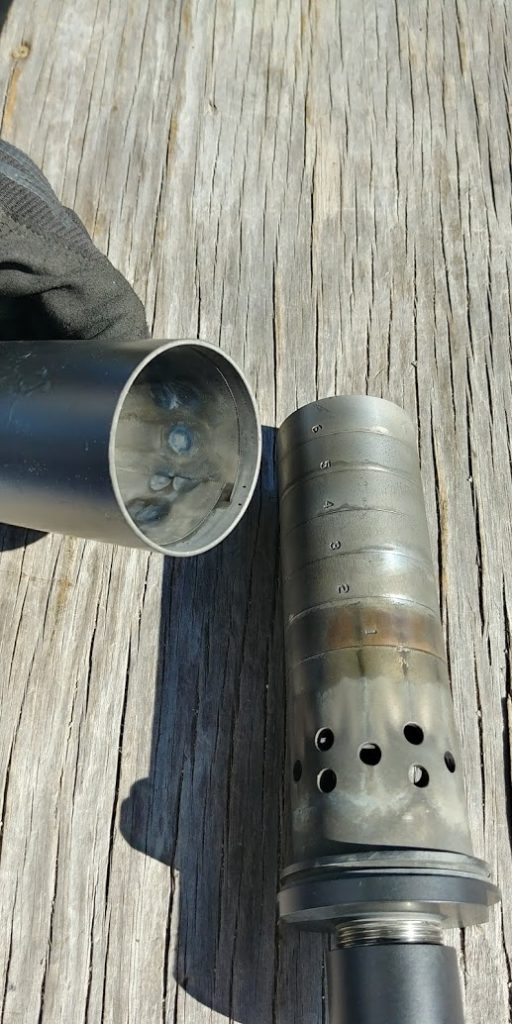 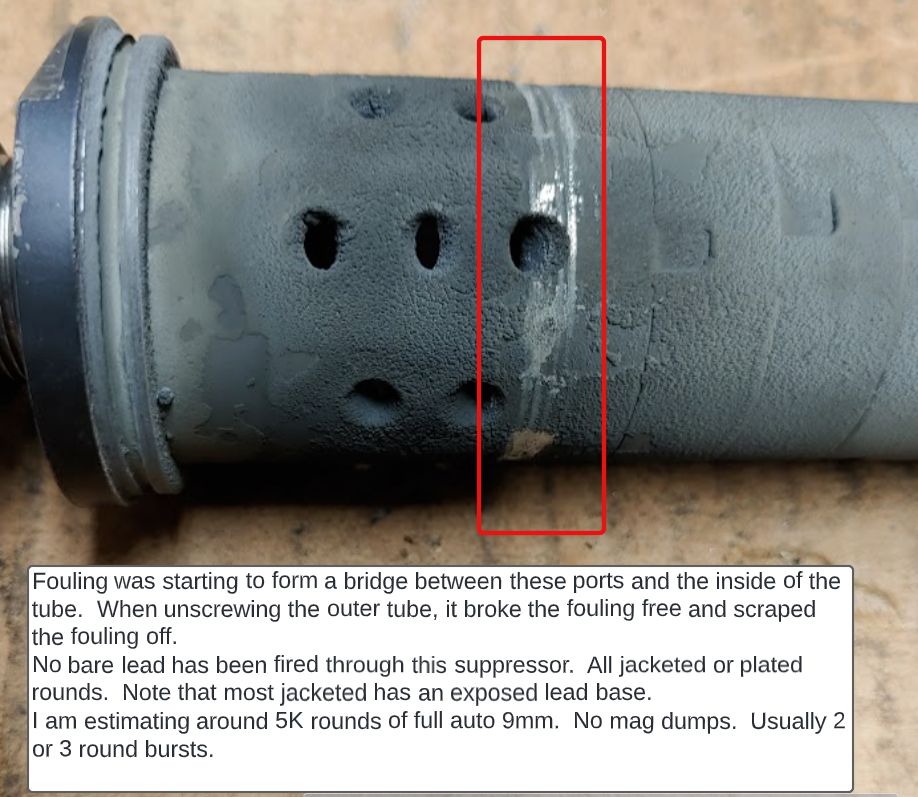 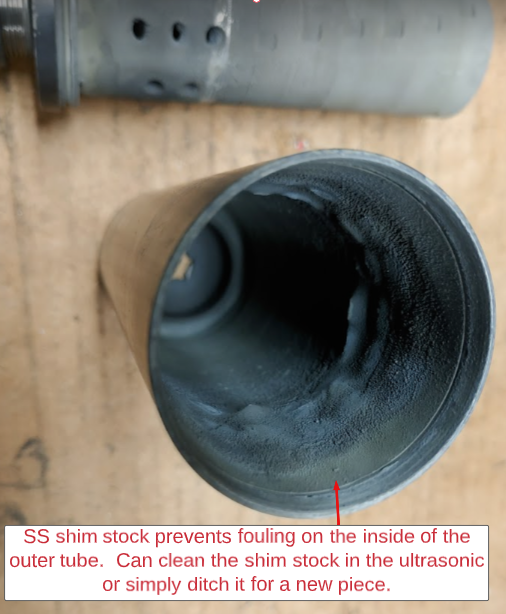 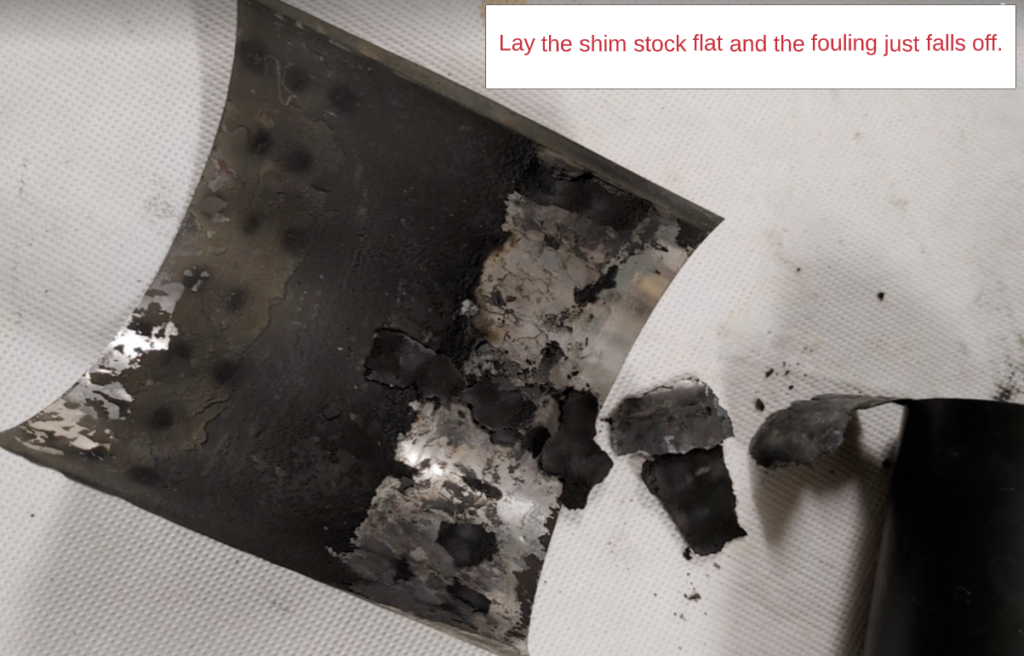 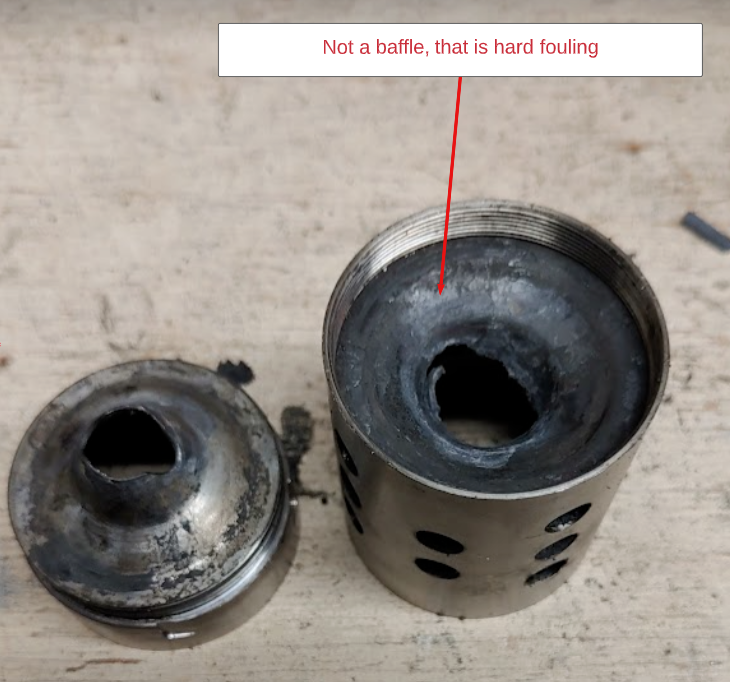 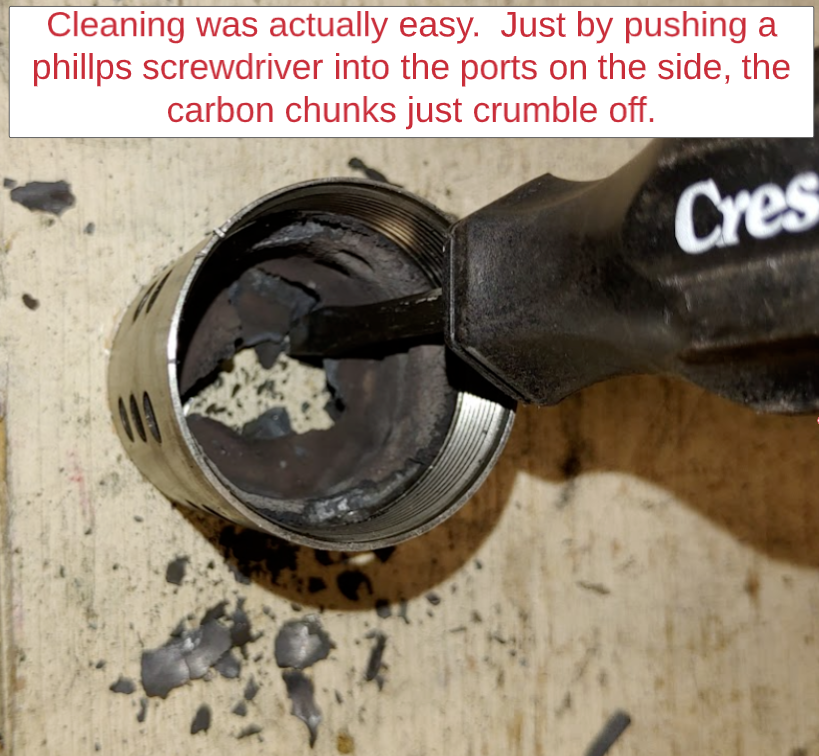